As someone who absolutely loves carrot cake, I found it really hard to believe that I had never actually made one myself. That was, of course, until today. I’m telling you, it was a tough choice as to which recipe would receive the honour of being the first one I’d make for this blog but Carrot Cake got it. Here’s how it went…
In a bowl, I whisked two eggs briefly using an electric whisk. I then added grated carrot, rapeseed oil and soft, light brown sugar and a mixture of chopped walnuts and pecan nuts. I gave all that another whisk before sifting in self-raising flour along with baking soda, ground cinnamon, mixed spice and a pinch of salt. I then used a wooden spoon to mix everything together before tipping it into a loaf tin which was lined with parchment paper. Before I put it into the oven, I smoothed out the mixture with the back of a spoon and then baked it for 1 hour 15 minutes.
Once the cake was ready (which I knew by using a skewer), I took it out of the oven and let it sit for 5 minutes before carefully peeling off the parchment paper and then let it sit on a wire rack until it cooled properly. To make the icing, I whisked Philadelphia cream cheese, icing sugar and the zest of a grapefruit. The recipe said to use the zest of an orange but, for whatever reason, I didn’t have any in stock and I love grapefruit and always have some in the fridge. To ice the cake, I simply smoothed the mixture over the top of the cake. Not content with my efforts, I went a step further and sprinkled some more chopped walnuts over the top. To serve, I sliced it up and served with freshly whipped cream.
Here's the cake cooling... 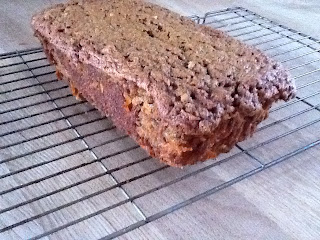 Here's my rather runny icing. It looks like a Christmas cake though! 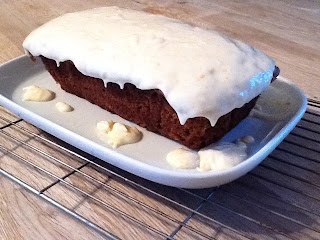 Doesn't it look so much better with chopped nuts on top?!﻿ 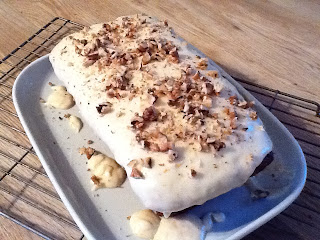 The verdict…
I loved this recipe and think I made a fair attempt at it so I gave the cake 8 marks out of 10. However, Dear Husband wasn’t as enthused about this one and only gave it 4. He said that he’s not fond of carrot cake and it reminded him of an episode of All Creatures Great and Small whereby Siegfried is given scone bread that’s too moist but it was actually under-cooked. On that point, although that series was made many decades ago, it is such a fantastic show about a veterinary practice in Yorkshire and centres around three vets – Siegfried, James and Tristan. It’s also being shown again on the Sky channel Yesterday so well worth watching or save the series for Christmas viewing. Anyway, getting back to the recipe, I can vouch that I really did do well with this one as Dear Sister No.1 said it was beautiful and gave it full marks. However, the Brother-in-Law didn’t finish his as he too isn’t in to carrot cake, ginger cake and some other cake. I suppose the bottom line is that if you like Carrot Cake, you’ll like this recipe and if you don’t, you won’t.
Overall, the recipe was easy and straightforward. It took me about 25 minutes to prepare and, if you decide to make this recipe, I highly recommend getting yourself loaf tin liners which will save you time measuring, cutting and buttering. There’s a great shop in Buncrana which I still call VFM even though it’s now called Supersavers and it has loads of baking equipment (amongst other things) and that’s where I got my loaf tin and liners. When I did peel the liner off the cake, I had to be super careful as the cake would give way easily – I suppose because of how moist it was. In relation to the icing, I think I may have added a little too much Philadelphia as my icing wasn’t as thick as it should have been – just look at my photos again. Therefore, make sure you still exactly to the correct quantities so that your icing is thick enough to hold its own.
Even though this cake wasn’t a hit with the boys, it was with the girls so I will most certainly make this recipe again. Not a bad start. Not a bad start indeed.
Posted by Lynda at 15:03 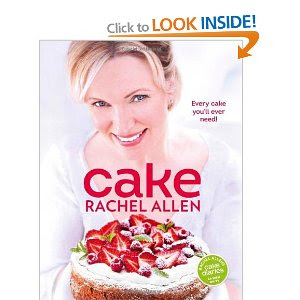